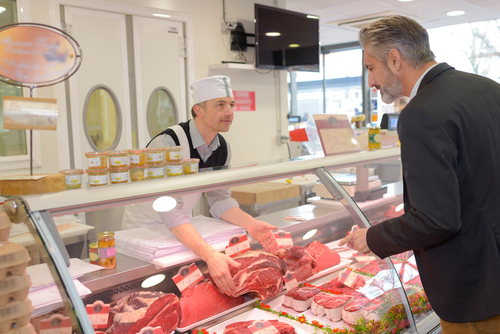 Have you found yourself in the meat department of a store wondering what makes meat kosher and regular meat is, besides the price?

Let me explain some of the processes of how beef ends up being sold as “kosher” beef.

It Begins With the Animal

For a cow to be considered for a kosher slaughterhouse, it must be in good health and able to stand on its own. Seems like a pretty low threshold, but is estimated that only 20 to 30% of cows brought to slaughter would be allowed into a kosher facility. An animal cannot be used if it dies before arriving for slaughter. An animal with a torn limb or other defect is also not allowed.

Animals must be killed in a quick and humane way for the meat to be kosher. A rabbi is there to oversee this process. Since all animals are God’s creation, animals are treated with respect, even those used for meat. A quick, clean cut of the throat is an instant kill. This is the method God handed down to Aaron to kill animals for sacrifice. Why is this method not recorded in the Bible? I think it is because this information was only needed by those who were sacrificing animals.

Certain fat and veins are removed. Kosher law requires that all blood be removed from the meat. Meat is first soaked in water, then salted, then washed in water again. This ensures there is no blood left in the meat.

As you can see, it is a quite lengthy and methodical process and this is what makes meat kosher. This, of course, leads to higher prices for kosher meat.

What do you think?  Now that you know the main process undertaken for kosher meat, will you consider buying it? Comment below and let me know.

Who Should Wear a Mask?

God’s Dietary Laws Revealed: What is a Kosher Diet?

Learn the 10 Commandments of Health and Longevity